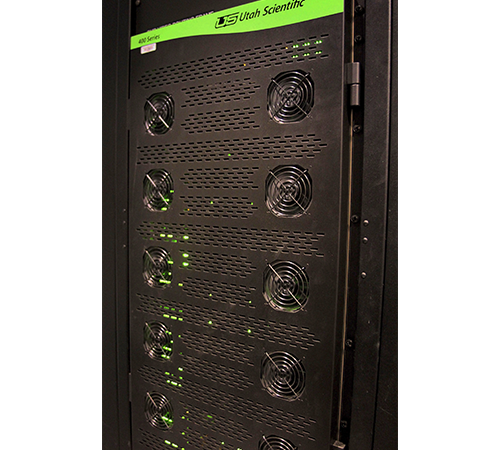 SALT LAKE CITY — July 27, 2017 — Utah Scientific today announced that Maryland Public Television has placed a UTAH-400 Series 2 hybrid enterprise router at the core of its recent facility upgrade and its strategy to make a gradual transition to IP operations. The PBS affiliate serves viewers throughout the state of Maryland, as well as the District of Columbia and parts of Delaware, Pennsylvania, Virginia, and West Virginia. The Utah Scientific solution was designed and architected by systems integrator Digital Video Group.

“Maryland Public Television knows the migration to IP is inevitable, but like many other broadcasters, it does not have the resources to make a wholesale, overnight switch to IP,” said Chuck Heffner, vice president of broadcast systems, Digital Video Group. “The station sought our help in finding a hybrid solution that can run in existing SDI environments, but can also support a gradual and cost-effective transition to IP.”

He added, “The UTAH-400 was a great choice for the upgrade. Not only does the router come with Utah Scientific’s no-fee, 10-year warranty — unheard of in the broadcast industry — but it’s based on a unique hybrid signal architecture that offers a single platform for all types of signals, including those used in IP networks.”

At Maryland Public Television, the UTAH-400 replaces two legacy routers, each about 17 years old, with one deployed in master control and the other serving in production. Both of these routers were workhorses and were still going strong, but the facility needed an upgrade and was seeking to lay the groundwork for an upcoming IP-based infrastructure.

“For three decades, Maryland Public Television has brought the renowned educational and entertainment programming of PBS to its viewers. It’s an honor to be a part of the station’s growth and plans for the future of broadcasting,” said Tom Harmon, president and CEO of Utah Scientific. “With the UTAH-400, Maryland Public Television has future-proofed its operations with a hybrid routing solution that can handle existing HD-SDI feeds now, and then drive an eventual move to 4K and maybe even 8K resolution without requiring another major upgrade.”

This website uses cookies to improve your experience while you navigate through the website. Out of these, the cookies that are categorized as necessary are stored on your browser as they are essential for the working of basic functionalities of the website. We also use third-party cookies that help us analyze and understand how you use this website. These cookies will be stored in your browser only with your consent. You also have the option to opt-out of these cookies. But opting out of some of these cookies may affect your browsing experience.
Necessary Always Enabled

Any cookies that may not be particularly necessary for the website to function and is used specifically to collect user personal data via analytics, ads, other embedded contents are termed as non-necessary cookies. It is mandatory to procure user consent prior to running these cookies on your website.