Celebrating Veterans Day at Utah Scientific has been a tradition here for many years. And this year is no different.

Utah Scientific recognizes and appreciates the sacrifice made by ALL Veterans and in particular our employee veterans, Cory Worsencroft, Navy, our Vice President of Manufacturing, also, Dewaine McClellan, Army, our Director of international sales. Thank-you for your service gentlemen!

Freedom is not free and we were reminded of that during the tragic loss of civilian and U.S. military lives last August while our military were evacuating U.S. citizens and allies from Afghanistan.

On Thursday, August 26, 2021 at 7:30 a.m., 13 American service members were killed in a suicide bomber attack near the international airport in Kabul, along with an estimated 170 Afghans killed, and 18 U.S. service members and scores of Afghans wounded. ((The August attack was one of the deadliest days for American forces in the past decade of the 20-year war in Afghanistan))

One of our coworkers, Lele Wilkinson, made us aware that her grandnephew was in the Marines and was assisting in the Afghanistan evacuation mission that day and was the only Utahan to survive the attack.

Today, Veterans Day 2021, we honor not only our employee veterans but also Lele’s grandnephew, Marine Corporal Wyatt Wilson who was severely wounded in the attack.

In a recent television interview, with CBS News, U.S. Marine Major Ben Sutphen, also wounded, was just 15 feet away when the suicide bomber struck, and was quoted as saying “another corporal with substantial blast injuries to his lungs and internal organs, still had enough grit and courage at, at risk of his own life to drag another injured Marine out of harm’s way.”

That ‘other’ corporal was Wyatt Wilson.

Wyatt, today, this Veterans Day 2021 myself, Brett and ALL the employees of Utah Scientific honor your service and bravery under enemy fire on that August morning, with a Marine flag, hand crafted by veterans from the Flags of Valor company.

The flag is signed by all the employees of Utah Scientific and the inscription on the back reads:

ON BEHALF OF A GRATEFUL COMPANY, ALL THE EMPLOYEES OF UTAH SCIENTIFIC THANK-YOU FOR YOUR SERVICE TO THIS GREAT NATION!

Thank you Wyatt, and we wish you the best in your recovery. 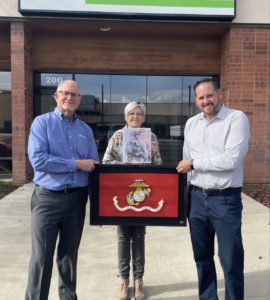